Check Valves
Check valves are a simple but important part of a hydraulic system. Simply stated, these valves are used to maintain the direction that fluid flows through a system. And since check valves are zero leakage devices, we can use them to lock hydraulic fluid from the cylinders. This section has been designed to help you understand how the different valves function and the strategy of where they are used in the system.

In-Line
In-line check valves are classified as directional control valves because they dictate the direction flow can travel in a portion of the circuit. Because of their sealing capability many designs are considered to have zero leakage. The simplest check valve allows free flow in one direction and blocks flow from the opposite direction. This style of check valve is used when flow needs to bypass a pressure valve during return flow, as a bypass around a filter when a filter becomes clogged, or to keep flow from entering a portion of a circuit at an undesirable time.

Pilot Operated
Because of slight spool leakage on standard directional control valves, we must add a check valve to the circuit if we need to hydraulically lock a cylinder. This type of check valve is referred to as a pilot operated check valve. 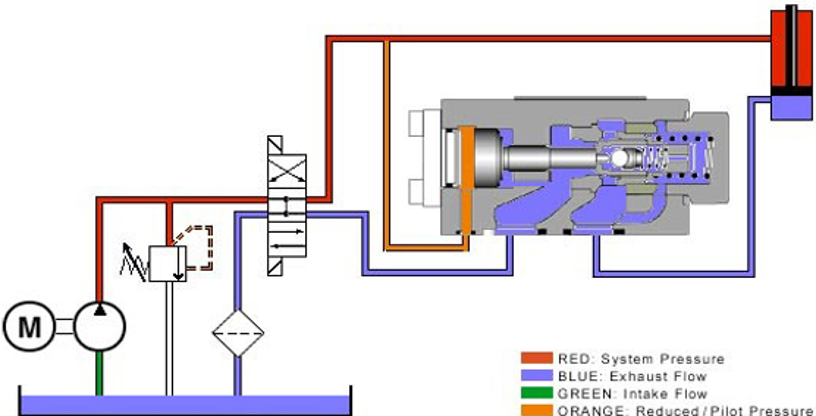 Pilot operated check valves may be pilot to open or pilot to close. This is determined by the application.

Pressure Control Valves – A control valve is a valve used to control fluid flow by varying the size of the flow passage as directed by a signal from a controller. This enables the direct control of flow rate and the consequential control of process quantities such as pressure, temperature, and liquid level. Common schematics for pressure control valves: 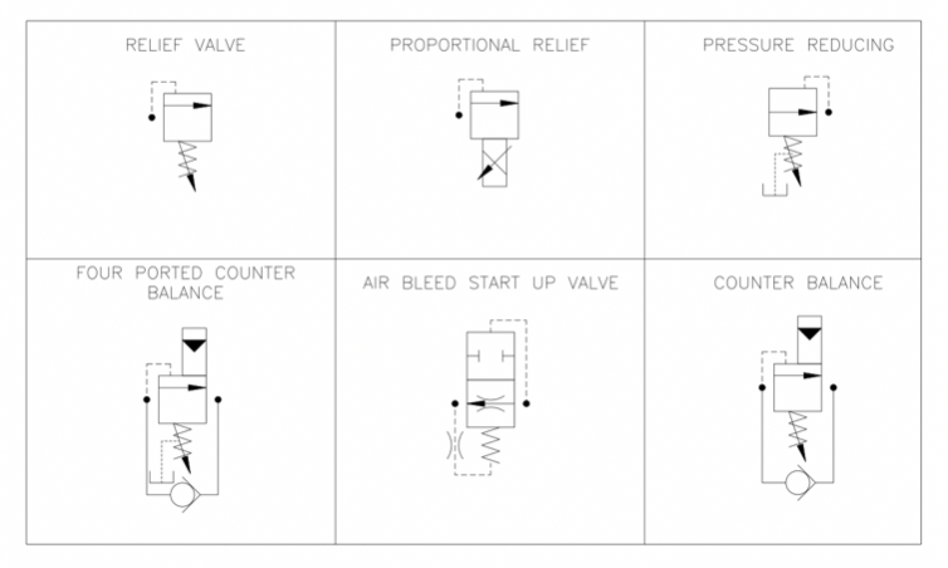 The primary concern in fluid power circuits is to either control the rate of flow or the pressure level. One misconception has been that pressure may be controlled with an orifice or flow control device. This is never accomplished with any degree of accuracy. For accurate control of force, six types of pressure controls have been developed.

By symbol, these valves closely resemble one another. Often only their location in the hydraulic circuit will designate what type of pressure valve they are.

Pressure Sequence Valve
A sequence valve is a normally closed pressure control valve that ensures that one operation will occur before another, based on pressure. In our clamp and drill system we want the clamp cylinder to extend completely before the drill cylinder extends. To accomplish this, we place a sequence valve just before the drill cylinder. We set the cylinder to 500 psi. This will ensure that the drill will not extend before we have reached 500 psi on the clamp cylinder. 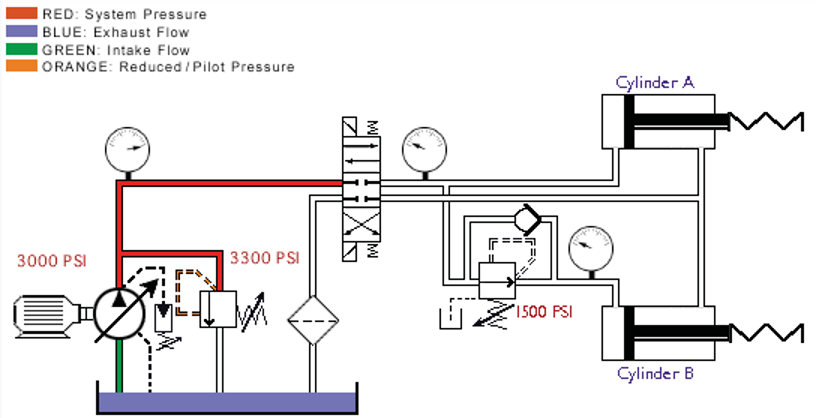 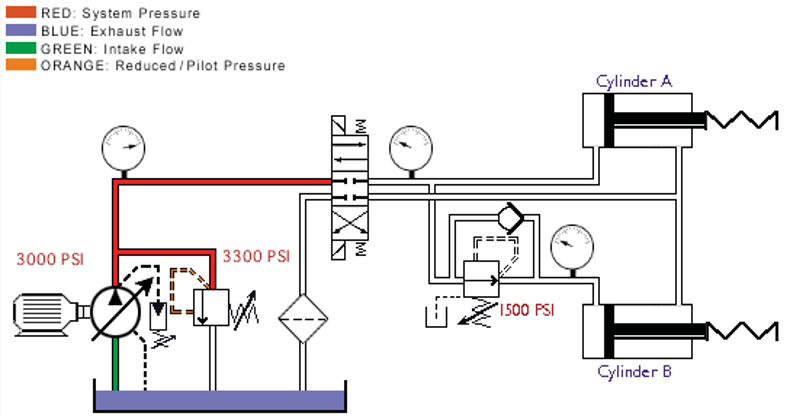 At this point, the valve begins to close off, limiting any further buildup of pressure. As fluid bleeds to the tank through the valve drain passage, pressure will begin to decay off and the valve will again open. The result is a reduced modulated pressure equal to the setting of the valve.

Consider a High-Low pump circuit that incorporates an 18 GPM pump which unloads at 1000 psi and a 10 GPM pump which relieves at 3000 psi. What is the maximum theoretical input fluid hp required?

Unloading Valve
An unloading valve is a remotely piloted, normally closed pressure control valve that directs flow to the tank when pressure at that location reaches a predetermined level.   A good example of an unloading valve application would be a High-Low system. A High-Low system may consist of two pumps; one high volume pump, the other a low volume pump. The system is designed to give a rapid approach or return on the work cylinder.  The total volume of both pumps is delivered to the work cylinder until the   load is contacted. 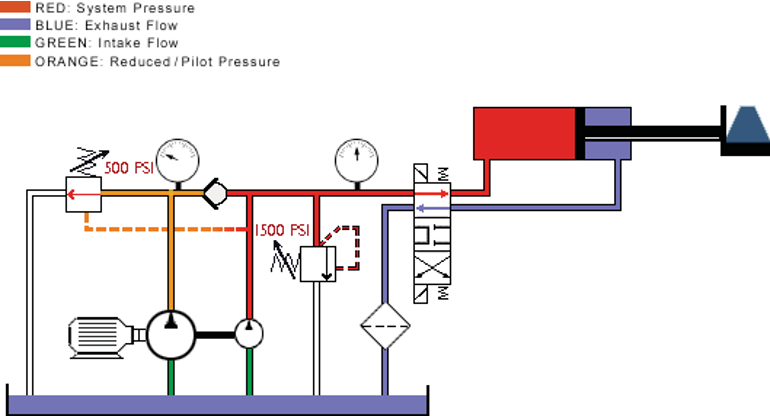 At this point the system pressure increases, causing the unloading valve to open.  The flow from the large volume pump is directed back to the tank at a minimal pressure. The small volume pump continues to deliver flow for the higher-pressure requirement of the work cycle. Both pumps join again for rapid return of the cylinder. This application allows less input horsepower for speed and force requirements 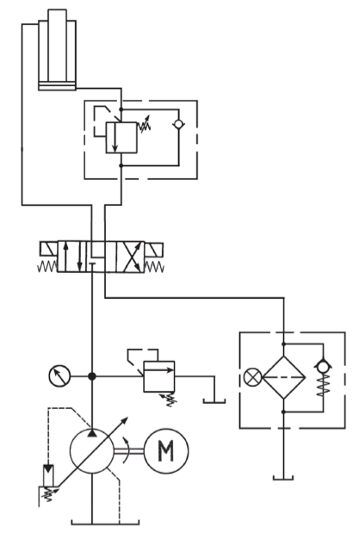 Counterbalance valves may also incorporate external piloting for smoother, “non hunting” performance. When the manufacturer utilizes both internal and external pilots you have the best of both worlds. The internal pilot lowers the load with counter pressure, while the external pilot drops all back pressure when performing work.

The pressure setting of the counterbalance valve is set slightly above the load- induced pressure of 1100 psi. This counters the load. As we extend the cylinder, pressure must slightly rise to drive the load down. 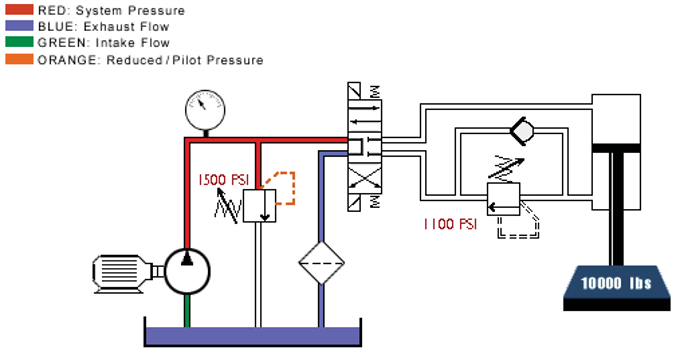 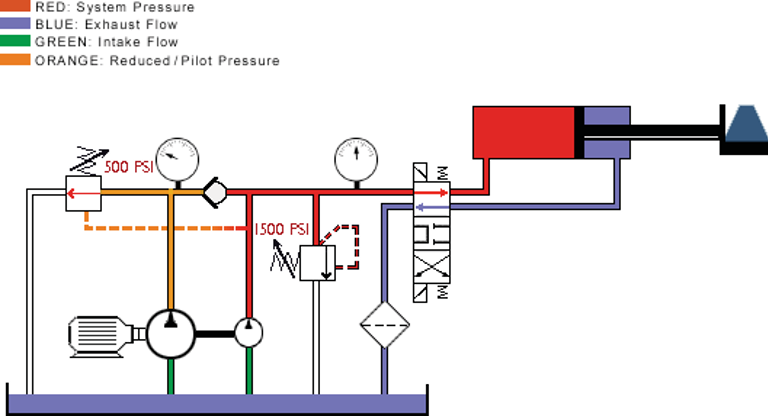 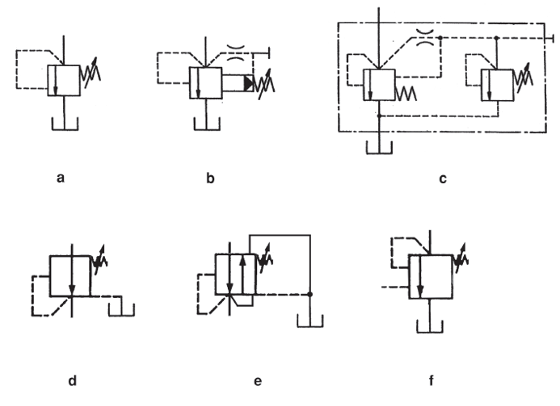 The dashed pilot line connected to the valve envelope at the point at which the inlet line meets the envelope indicates the pilot pressure in sensed internally to the body of the valve. The spring chamber in relief valves are internally drained to the outlet, or secondary port, though that feature is not shown by current ISO 1219-1 symbols. Back pressure in the outlet line of a relief valve acts on the spring side of the poppet or spool, and thus is additive to the pressure setting of the valve. What this means is that if the tank line back pressure increases by 100 psi, the valve will open at 100 psi more than it was set to open, though the differential pressure across the valve does not change. 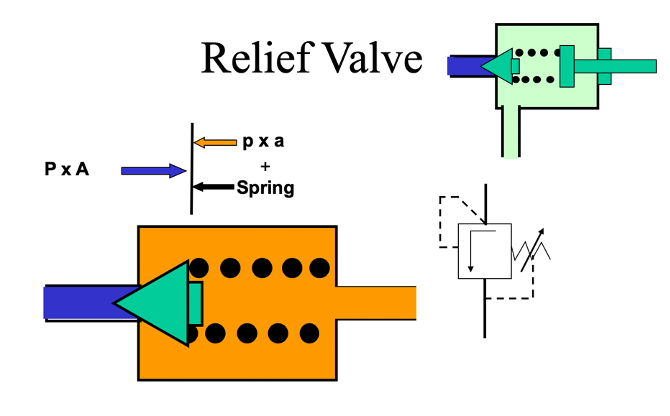 Pressure Control Valves
Pressure relief, pressure reducing, unloading, sequence, counterbalance, and brake valves control the pressure in systems. One of these valves can serve multiple purposes, depending upon where it is located in the circuit, how it is plumbed, how the pilot circuit operates, and whether or not the valve drains internally into the reservoir return line or has an external drain.

In addition, an unloading valve is a remotely piloted, normally closed pressure control valve that directs flow to the tank when pressure at that location reaches a predetermined level.   A good example of an unloading valve application would be a High-Low system. A High-Low system may consist of two pumps; one high volume pump, the other a low volume pump. The system is designed to give a rapid approach or return on the work cylinder.  The total volume of both pumps is delivered to the work cylinder until the load is contacted.

In a typical accumulator application, shown in Figure 1-10 below, hydraulic oil from the fixed displacement pump will pass through an isolating check valve to fill the accumulator. This type of circuit uses a 3-position directional control valve that has a blocked pressure port in the center envelope. When the accumulator becomes filled, pressure on the accumulator side of the check valve pilots the unloading valve open, unloading the pump to the reservoir at low pressure. 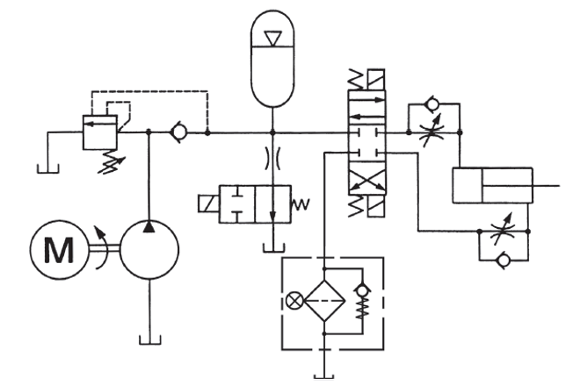 The unloading valve shown in Figure 1-10 is a variation on a standard unloading valve as it includes an internal as well as an external pilot, making the valve illustrated an unloading-relief valve. The valve will open upon sensing adequate pilot pressure from either pilot source. There are differential pressure unloading valves which are specifically used in accumulator circuits to open at a higher pressure than they close.

Unloading valves are normally closed, externally piloted, and may be internally or externally drained. An external drain is required if there is back pressure at the outlet port, for example if the fluid is unloaded through a heat exchanger or circuit that creates back pressure that would upset the pressure differential of the valve. An unloading valve has a low pressure drop across the valve when it is in the open state. The valve is held fully open by the pilot signal to unload the pump at low pressure. 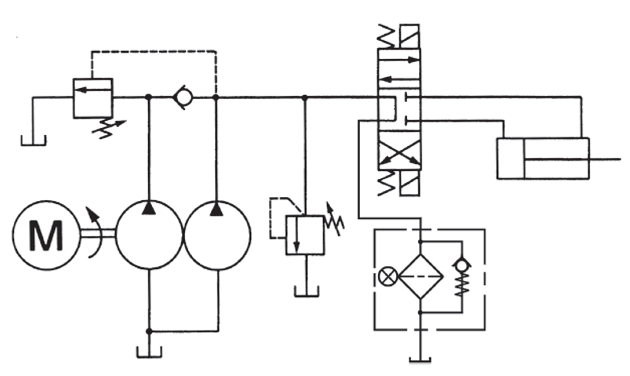 Fig. 1-11. An Unloading Valve in a High-Low Pump Circuit. 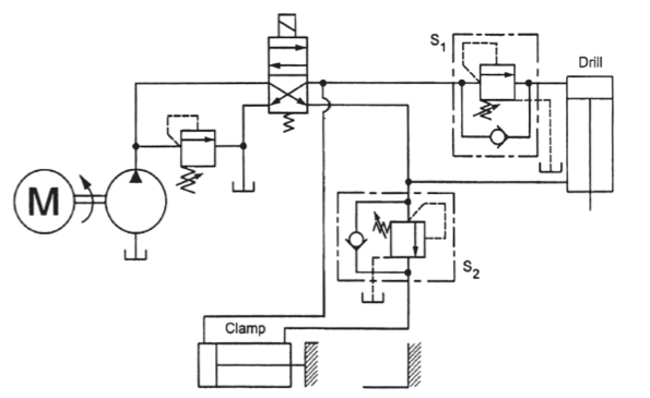 They are used on clamp and work circuits to assure required clamping force is reached in the clamp cylinder before the work portion of the cycle begins. Sequence valves may be internally or externally pilot operated, but they must have an external drain because the outlet port is pressurized. Sequence valves may be equipped with integral reverse free-flow check valves. Sequence valves are normally closed and are pilot operated to open to allow full flow to the actuator. In a typical application, fluid is directed to extend both the clamp and drill cylinders at the same time.

When the directional control valve is reversed to retract the cylinders, some means must be employed to prevent both cylinders from retracting at the same time. This would cause the clamp to relax while the drill was still in the work piece. The proper sequence would be first to retract the drill, and then to retract the clamp.